Networking at the ‘2nd Zott Information Forum for Public Authorities and Institutions’ | 24.07.2014

In the daily production process, there are numerous points of contact between a dairy and a wide variety of institutions. Good communication at eye level forms the basis for a solid, trusting and successful collaboration. To further strengthen this communication, and to stimulate an exchange of views in order to better understand and be aware of the position of the other person, the ‘Zott Information Forum for Public Authorities and Institutions’ was set up in 2012. Building on the positive experiences from the first event, several employees of the rural district and veterinary offices, the Department for Food, Agriculture and Forestry, the government of Swabia, the Animal Health Service and the milk testing organisation met on the premises of the Alte Brauerei in Mertingen on the 24th July in order to share their experiences and to hear the news from the world of the gourmet dairy.

A great deal has happened at Zott, as the speakers Christine Weber (Chairman of the Board and Executive Director), Christian Schramm (Head of Milk Procurement), and Rudolf Kaiser (Head of Quality Management) were able to report to the guests. The ‘Zott Passion for Quality Milk’ (ZQL) programme, which is being expanded internationally, not only recognises and rewards the excellence of Zott milk producers, but also works together with them to find practicable concepts for accredited and sustainable agriculture in the future. "For us, it is important that this concept lives and develops and is not just a theoretical formula. In our opinion, the key to success is the intensive dialogue with our producers and the practical benefit therefrom. We are proud of our recently honoured 22 German company winners which have received the Zott Award, the ‘Goldene Milchkanne’ (Golden Milk Jug)."

"Within the scope of this concept, we are also establishing a great variety of projects to promote the process and product quality in Poland and the Czech Republic", explains the Head of Milk Procurement. As part of the ZQL concept, the ‘Homeopathy in Dairy Cattle Barns’ seminars in Germany have developed to become a permanent fixture. 1,400 participants have already attended Zott’s advanced training courses with the experienced animal healers, Birgit Gnadl and Angela Lamminger-Reith, since 2010. These milk producers benefit from what they have learned, as do the 16 dairy farms from Geslau and Feuchtwangen which participated in the pilot project entitled ‘Safeguarding Udder Health in Dairy Farming’ in March 2013. Here, Zott and its farmers were supported by the veterinarians, Dr. Fidelak and Dr. Klocke, from the bovicare company.

The project’s two main objectives are a reduction in the use of antibiotics to a sensible, appropriate level for animal health, and the improvement and stabilisation of udder health. "Quality milk and animal welfare are of major concern to all parties – milk producers, dairies, public authorities and, of course, the public. In addition, we are occupied with the end of the milk quota next year and how this will affect the amount of milk. We do, of course, also ask ourselves what will happen in the medium and long-term in our catchment regions. One thing is certain, however, and that is we want to, and will, also pull in the same direction in the future in order to achieve our goals," Christian Schramm concludes. The Head of Quality Management, Rudolf Kaiser, also gave the audience an insight into the extensive audit which Zott can produce as a leader in the food industry. As an internationally-recognised gourmet specialist, Zott operates in accordance with a strict HACCP concept. Just as this system promotes food safety and consumer protection, so did the ‘2nd Zott Information Forum for Public Authorities and Institutions’ contribute to the interaction and sharing of knowledge.

Representatives of the rural district and veterinary offices, the Department for Food, Agriculture and Forestry, the government of Swabia, the Animal Health Service and the milk testing organisation, from the entire Zott milk catchment area took part in the ‘2nd Zott Information Forum for Public Authorities and Institutions’.

Press Release
Employees from Zott get involved in the ‘Children run for Children’ charity run, as well as the M-net company run | 14.05.2014

Employees from Zott get involved in the ‘Children run for Children’ charity run, as well as the M-net company run

Sport is not just really good fun, it helps children and adults to compensate for the constant sitting and excessively one-sided movements. Furthermore, it can be ideally combined with social commitment as has been shown by a few of the Zott traditional dairy’s employees at two events.

‘Move to make things happen’ – this is the motto of the ‘Children run for Children’ initiative which the gourmet dairy has been supporting as a sponsor since the 2009/2010 school year. Every year, Zott employees – who are socially-committed and undertake voluntary activities – take up the challenge at the start of the run in Munich. This year, Caroline Fritz, Tanja Kratzer, Alexis Land, Matthias Melber, Jürgen Mengele and Luke Schultz nailed their colours to the mast for a good cause on the 2nd May. The volunteers distributed delicious yoghurt and dessert products to about 2,000 children and young people who did their laps on the grounds of the Olympic Park to raise money for the SOS-Kinderdörfer (children's villages). The young athletes covered a distance of 7,622 kilometres and, on this day of sport in Munich, raised donations totalling more than 33,500 euros.

Running talents at Zott
It was also fast and athletic at the 3rd M-net company run on the 13th May in Augsburg where, for the first time, two teams from Zott were at the start of the 6.7 km long track. Jochen Dinkel, Stefan Pfanner, Andrea Richter and Martin Stigloher formed the first team. The second team consisted of Bernd Koller, Marc Leonhardt, Franziska Meissner and Christian Wölfel. They are all members of the Zott running group, which is one of the sports activities offered by the Zott Aktiv-Zentrum (activity centre), and were thus perfectly prepared for the big run. However, for the glorious eight, it was not about a top ranking, but much more about experiencing an interdepartmental ‘we-feeling’ and the knowledge that two euros per runner were going to be donated by the organiser to a social project. "We are very proud of all our employees who dedicate their spare time to various social projects and programmes. The two events are great examples of how to combine social commitment with the joy of movement and staying healthy. At our Zott Aktiv-Zentrum in Mertingen and Guenzburg, we offer our employees a wide range of free sports, education and training opportunities which contribute to a good work-life balance," explains Dieter Wiedenmann, Head of Human Resources & Organisation. 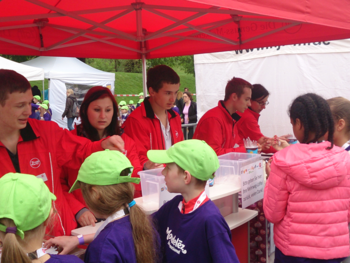 Zott employees regularly support the ‘Children run for Children’ charity run in Munich with their voluntary work and distribute products to the young runners. 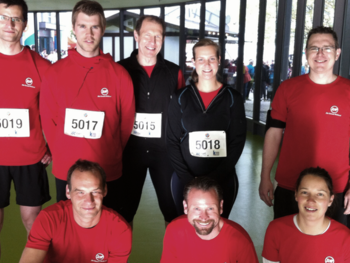 Eight talented runners represented Zott at the 3rd M-net company run – they had great fun when running and during the preparation phase, too!

Press Release
Help is on its way: Zott employees take part in a blood donor and bone marrow typing campaign | 01.04.2014

Help is on its way: Zott employees take part in a blood donor and bone marrow typing campaign

Zott does not just pay lip service to social responsibility, it is firmly anchored in the values of the family business. With its Corporate Social Volunteering concept, i.e. a concept for voluntary activities in the name of the company, the traditional dairy offers all its employees a joint platform for social and societal commitment supported by Zott. In many different ways, employees from the most diverse of departments can thus offer targeted help and experience team spirit of a very special kind, such as at Zott’s big blood donation and bone marrow typing campaign held at its headquarters in Mertingen on the 31st March.

The event, which was initiated and financed by Zott, was attended by the Bavarian Red Cross (BRK), as well as the German Bone Marrow Donor File (DKMS). In the period from 10 am to 3 pm, around 70 employees donated blood and ensured a full utilisation of the blood donation area at the facilities on Bäumenheimer Straße. 30 other employees showed they wanted to be active against blood cancer and set an example by participating in a DKMS bone marrow typing. Even as far back as December 2007 to January 2008, extensive bone marrow typing campaigns, in collaboration with the DKMS, took place at the Mertingen and Guenzburg sites. Four active donors had already emerged from these past bone marrow typing campaigns who, as genetic twins, could help people who are ill to fight the disease. "Zott is proud to have such motivated and committed employees. With a few millilitres of blood and a saliva sample, one can make a valuable contribution to the community and help those who are ill", explains Dieter Wiedenmann, Head of Human Resources & Organisation.

For all the employees who participated in the blood donation or the bone marrow typing campaign, which had been organised by Tanja Kratzer from Zott Corporate Communications, there was an added bonus – they were all entered into a great prize draw in which the winner won a chance to take part in the Zott Incentive in the summer of 2014. This made participation doubly worthwhile! 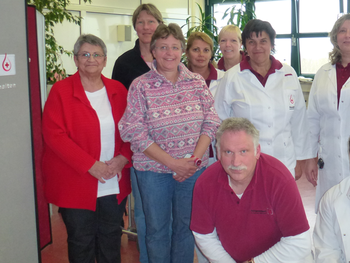 In just one day, about 100 employees from Zott did something brilliant – the teams from the Zott blood donor and bone marrow typing campaign were delighted at the enthusiastic participation for such a good cause.