Zott awards dairy farmers who operate in a sustainable way

On Thursday, 28th January, Zott, the gourmet dairy, awarded the “Goldene Milchkanne” (the Golden Milk Jug) to 21 of the most sustainable and successfully-operating dairy farmers. The prizes in four categories are each endowed with 1,000 to 2,000 euros. The award ceremony in the Orangerie in Ansbach was the high point of the biennial best-practice competition which the Mertingen dairy has held as part of its “Zott – quality milk with passion” sustainability programme.

With this award, Zott introduces the work of their dairy farmers and recognises their outstanding performance in terms of milk quality, as well as their exemplary practices. In turn, it is hoped that other milk suppliers will not only be inspired, but will be given ideas for their own sustainable practices. Christian Schramm, head of milk procurement at Zott, was pleased with the results of the competition: “It has again impressively confirmed that our milk producers are very passionate about their profession and their animals. We at Zott benefit from this enthusiasm, because this naturally also affects the milk quality and thus our products.”

Especially under difficult market conditions, it is important to tirelessly draw attention to the dairy farmers’ achievements and thus to the high quality of the dairy products. In the medium-term, this serves to heighten the appreciation of the quality foodstuff, milk, and thus all dairy farmers.

The winning businesses are located throughout the whole of Zott’s milk catchment area, which extends over large parts of Bavaria and eastern Baden-Württemberg. The awards for the dairy farmers are divided into four categories, which most closely reflect the quality of the farmers and their motivation for sustainable milk production.

Category, milk quality: The cell count of the milk is an important indicator and illustrates the state of udder health in milk-producing animals. The lower the count, the better. Selected were the farms that produced the lowest cell content over a period of 36 months. To account for the different operating variables, the three businesses with the lowest cell numbers, as well as the three producing the largest quantities of milk, were awarded.

Category, production environment: The basis of this category is the Zott supplier evaluation, into which, inter alia, the results of regularly conducted farm visits by the “Milchprüfring Bayern” (Bavarian Milk Testing Association) are incorporated. A high score in the supplier evaluation documents excellent quality standards, such as in respect of housing conditions, food and feeding, hygiene, documentation, and environmental protection. In the last three years, nine businesses have received full marks and have now received their awards.

Category, longevity of dairy cows: This criterion illustrates almost perfectly the close link between longevity and the economic viability of dairy cows. In this category, Zott therefore bestowed an award on the three businesses with the highest proportion of older dairy cows. The winning families have shown that, with the proper care and housing conditions, an older cow can still give milk, thus contributing to the economic success of the business.

Category, conservation of rare breeds: Modern livestock production has to be profitable, which is why animal species with special and profitable characteristics are preferred. Other breeds, on the other hand, are endangered because, from the current point of view, their characteristics no longer necessarily benefit the livestock. As a result, biodiversity is at risk. For animal husbandry and agricultural reasons, it is necessary to keep rare breeds. Zott has therefore sought, and awarded, farms which keep the greatest majority of cattle from endangered breeds.

In 2013, Zott introduced the “Zott – quality milk with passion” quality and sustainability programme which concentrates all the projects and measures which are directed at the dairy farmers. The focus of the programme is, in addition to the quality of the raw material of milk, on the needs of humans and animals.  Thus, inter alia, new approaches in animal health and animal husbandry are tested, such as how to reduce the use of antibiotics and the promotion of homeopathy in the cowshed. The Best Practice Award, the “Goldene Milchkanne” (Golden Milk Jug) is a feature of the modular programme and is awarded every two years to those Zott milk suppliers who not only operate in a particularly sustainable way, but also show exemplary milk quality. 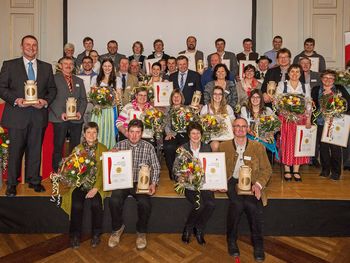 On Thursday, 28th January, 21 milk-producer families were presented with the ‘Goldene Milchkanne’ (Golden Milk Jug) in Ansbach. With this award, the Zott Dairy acknowledged their particularly sustainable operations and exemplary milk quality.

The Zott young farmers’ concept, which encompasses training, discussion and practical insights, continues on its successful course. Hosted by the Ulmer Fleisch GmbH, topics relating to milk production were discussed, as well as aspects of quality marketing in the meat industry.

The clear commitment to quality products, safety in food production and transparency along the entire value chain are success factors for a sustainable dairy industry and prerequisite for the successful growth of all the partners involved. For five years now, Zott has been actively expanding the basis for discussion with its young farmers and also providing training at a high level. The 5th Zott Dairy Day for Farm Successors, involving around 90 farmers, took place in Ulm on 20th January.

Together with the South German meat processors, the Müller Group, as well as a representative of McDonald's Germany, Zott provided information not just on the current milk market, but also on the market development in the meat industry, as well as on the BEST Beef working group – an alliance for excellence, safety and transparency. Christian Schramm, who is responsible for international milk purchasing at Zott, repeatedly emphasised the importance of communication between milk producers and milk processors and, first and foremost, the importance of the discussion on any value creation opportunities.

With a visit to the Ulm slaughterhouse, farmers received an immediate and exclusive insight into the milk production in the downstream sector. Martin Müller, a member of the owner family of the Müller Group, as well as Stefan Rossmann, CEO of Ulmer Fleisch GmbH, were available to answer any questions openly and without restriction. The annual event exists to discuss issues regarding milk, the market, and other relevant aspects in small working and discussion groups. Jürgen Straub, Senior Team Manager of Quality Assurance at McDonald’s Germany, offered the young farmers real experience. He spoke at length about the BEST Beef alliance and presented the opportunities for Zott farmers.

Christian Schramm emphasised “We are proud that our comprehensive Zott vendor evaluation has won the recognition of the QM milk initiative and that, through the regular auditing of our delivery operations, our high standards are ensured.” It will now not cost a great deal, Schramm continues, to further develop this evaluation in collaboration with the BEST Beef alliance, thus basically offering all the dairy farmers the option to generate additional revenue with their beef cattle.

This, along with other projects, demonstrate the Mertingen dairy’s fundamental understanding of being a partner, and remaining a partner, as well as of giving the dairy industry a future. The Zott Dairy Day for farm successors will take place again in 2017, too. 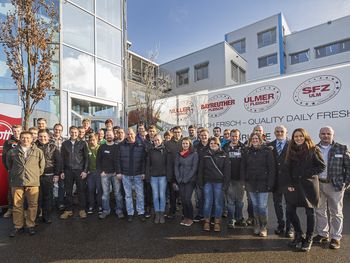 From right to left: Exclusively at the Zott Dairy Day – Stefan Rossmann, CEO of Ulmer Fleisch, as well as the responsible people from Zott, Michaela Matthew and Ludwig Wild, who accompanied one of four tours of the company.