Once again, this year, the Zott dairy from Mertingen has sent a Johanniter Christmas truck to Bosnia-Herzegovina. Together with around 40 other trucks, the Johanniter relief operation is taking parcels to those in need in Southeast Europe. The Christmas packages contain basic foodstuffs, sweets, toiletries and small gifts for starving children living in poverty, families, the elderly and people with disabilities.

One of the drivers is Tom Frede, a logistics employee at the Zott dairy. For many years, he has been a volunteer Johanniter Christmas trucker. Zott gives him time off for the duration of the trip, makes the truck available and pays the incurred fuel bills. As part of a convoy, Tom Frede drives the truck to the two cities of Banja Luka and Tuzla in Bosnia – which is a drive of about 1,000 kilometres from Mertingen – until he arrives at his destinations with the more than 1,200 Christmas parcels on board. Markus Kristen, also a Zott employee and incidentally also involved in the Johanniter Donauwörth local association, has been part of the convoy with the Christmas trucks for more than 22 years. As an experienced convoy manager, Marks Kristen will lead the convoy trip to Banja Luka and Tuzla this year. Together with the other Johanniter Christmas truckers, both men will leave Landshut on Boxing Day to embark on their trip which will last several days. Thus, they spend the days between Christmas and New Year on the road, instead of with their families. "To be welcomed in Bosnia by children with shining eyes still always moves me, even after so many years," explains the experienced Christmas trucker, Tom Frede.

On Friday, 18th December, the first partial loading of the Zott truck took place on the car park in front of the Mertingen dairy area as part of a Christmas event. The children from the nursery and the pupils from Mertingen primary school, as well as numerous employees from the Zott dairy, packed up countless parcels for the Christmas truck and also helped with the loading. Many also took the opportunity to make another donation, thus supporting the work of the Johanniter. Markus Kristen is delighted with the great willingness of his colleagues and the Mertingen school classes and nursery groups and said; "against the backdrop of the current refugee situation, it is great, and also a lovely sign, that so many people have again responded to our appeal this year. For us it is a relatively small, albeit not insignificant effort, but for those families in need in Southeast Europe, such a parcel with basic foodstuffs and hygiene items means a great deal – in fact, some of these families even depend on this aid from Germany." 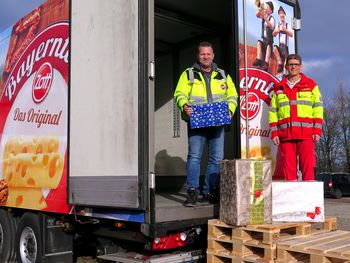 Just before their journey to Bosnia, Tom Frede (left) and Markus Kristen load the Johanniter Christmas truck on the Zott works premises in Mertingen.

A great start to their careers: Zott welcomes new trainees and students on dual study programmes

Anyone who has a passion for dairy, gourmet and brand products, and wants to translate this passion into a challenging profession, will hit the bullseye with an apprenticeship at Zott. This year, 24 trainees and 1 re-trainee will be starting their careers as a milk technologist, mechatronics engineer, dairy technician, laboratory assistant, warehouseman/woman, IT specialist for system integration and an industrial clerk respectively at the Mertingen and Guenzburg sites. Just one month later, three students from the Duale Hochschule Baden-Württemberg will be starting their dual studies at the Mertingen traditional dairy and will be combining theory and practice.

"For many years, our gourmet dairy has been providing successful education and training, thereby giving young people a professional future and an acknowledgment of their abilities. We are proud that we have again been able to gain so many qualified young people for our company in 2015", explains Eva Staudacher from Zott’s employee development department. On the 1st September, she welcomed the new trainees and students at the company’s headquarters in Mertingen and gave them a presentation on the history, philosophy and objectives of the company. Among many other helpful tips for training and study, there was also a two-hour conducted tour of the company, a mutual getting-to-know each other session, and information on the topics of hygiene and quality awareness. At Zott, regardless of the choice of career path, all of the 28 young people will benefit from expert and superior training and a diverse range of tasks, as well as a work atmosphere and corporate culture shaped by family values.

The new arrivals at Zott can already look forward to the beginning of November as, in the ‘Zott Active Apprentice’ programme designed specifically for Zott, they can participate in various exciting and very interactive courses which deal, among other things, with topics like health, safety at work and nutrition. 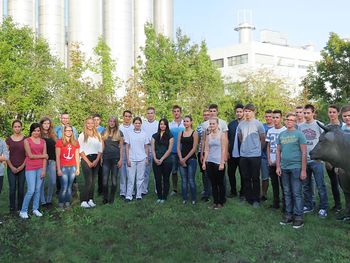 Whether a breakfast cereal coated with milk and white chocolate like the Monte Choco- Flakes, or delicate chocolate balls with a crispy centre like Monte Choco-Balls, whether crunchy mini chocolate-chip cookies like Monte Cacao Cookies, or mini-waffles coated with a thick layer of chocolate like Monte Waffle Sticks – every extra element makes the classic, double-layered Monte dessert an even more special taste experience which will make both younger and older Monte and dessert fans jump for joy!

Now in eight varieties, the double-compartment range offers more variety than ever before! The four new varieties complement the Monte Butter Biscuits, Monte Cherry, Monte Cappuccino Balls and Monte Crunchy products beautifully. As of April 2015, you can find the 125g-cup desserts in the refrigerated section in supermarkets, superstores and hypermarkets. The new product launch is being accompanied by TV commercials on all the major channels in the second-half of the year. 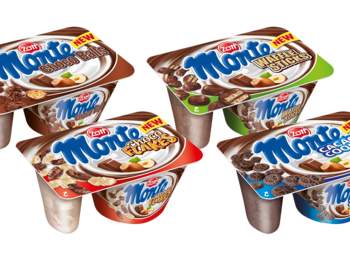 The Zott concept for an annual farm successors’ day for dairy farmers is expanding. The large variance of milk and specific animal health issues, the ongoing dialogue on the opportunities and challenges presented by the markets and the associated competitive conditions are of interest to the younger generation. Milk producers and milk processors can benefit from this common communication platform and create mutual understanding.

Now in its fourth consecutive year, the Zott gourmet dairy’s ‘Hofnachfolgertag’ (farm successors’ day) has taken place. Around 100 young dairy industry enthusiasts, who will take over as successors to the family business, gathered on the premises of the Besamungsverein (insemination association) Neustadt Aisch for a varied programme. For many years now, personal exchanges and training have been in the foreground, remarked Christine Weber, Executive Director of the dairy, on the opportunities and challenges for Zott in the international markets, while Christian Schramm, who is responsible for international milk procurement, gave a lecture on the developments in the dairy market in 2015. In addition to this, lectures were held on ensuring the economic sustainability of production and on the latest findings in genomic selection in cattle breeding. In addition to the presentation of agricultural software and visits to the laboratories, the exclusive breeding bull show ranked among the absolute highlights.

The dialogue between milk processors and milk producers plays an important role at Zott. Throughout the year, the milk procurement team holds intensive discussions with the farmers. Regular meetings, dairy specialist discussions, telephone and personal advice on-site on the farms – all this is important and makes for a good collaborative relationship. The concept of the ‘Hofnachfolgertag’ (farm successors’ day) is primarily aimed at the younger generation. "Our goal is to remain in contact with the successors, to identify issues that are relevant to sustainability for both parties", says Christian Schramm, outlining the original idea. In just four years, the event has become a firm fixture in the annual calendar. After the opening event at the dairy, the meetings in the milk production centre in Triesdorf, as well as at the Fachklinik für Wiederkäuer (specialist clinic for ruminants) in Oberschleißheim, the fourth ‘Hofnachfolgertag’ took place against the background of breeding progress. 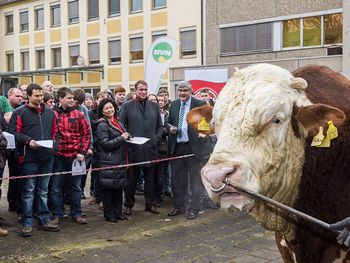